How Do Dogs Miss Their Owner? 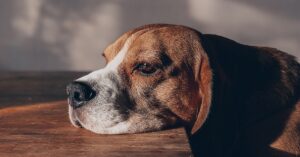 Dogs are loyal animals that form emotional bonds with their owners. This makes them miss their owners when the owners leave. A dog is relatively adaptable when it is young, but after a while, it starts to get attached to its owner. If you're leaving the house for a long time, you may notice the dog misses you, but don't worry - it's totally normal.
Changes in behavior
There are a number of changes that occur when dogs miss their owners. These changes include a decrease in appetite and an increase in sleeping, among other things. In extreme cases, the grieving dog may become clingy or exhibit compulsive behaviors. Regardless of the cause, many owners recognize these changes in behavior as signs of grief.
While most dogs do not forget their previous owners, they become attached to their new owner over time. For this reason, they may exhibit signs of sadness or anxiety when they're separated from their owners. For instance, a dog might go for days without eating or may wait for the owner to return. As such, any sudden changes in behavior must be monitored carefully.
Duration of memory
There are several factors that influence the duration of memory for dogs. The first factor is how much a dog remembers in a short amount of time. In general, dogs have a short-term memory of about five minutes. This is much shorter than the memory span of human beings. However, dogs can remember long-term events such as being petted or greeted by a friendly owner.
Dogs can also have episodic-like memories. They can remember events that have happened to them or events they have witnessed. These memories are not very long-term, so it's important to keep in mind that they need to make new associations often. Dogs are able to remember some things because they associate them with positive experiences.
Signs of grieving in dogs
Dogs can show signs of grief after the death of their owner. They may become less active and sleep longer than usual. They may also become more clingy and vocalize a lot. Keeping a regular routine with your dog can help them cope with the loss and prevent them from becoming destructive.
Grief in dogs can differ greatly, depending on the level of bond between the owner and dog. This bond determines the intensity of the dog's grief, and how it manifests itself. A list of signs can help you figure out if your dog is experiencing grief after losing its owner. In one study, a German shepherd ceased eating and leaving the house after the owner died, and became depressed. Some dogs may even experience acute grief and require medical attention.
Signs of attachment to a person
A dog may show signs of attachment to a person if it constantly makes eye contact with them, such as by lying down or playing dead. It may also lick you or look into your eyes. This behavior is a sign that your dog is trying to bond with you, according to veterinarian Rebecca Greenstein, a medical advisor for the pet website Rover.
According to researchers, dogs and humans have been living together for tens of thousands of years, and this might have made dogs more likely to form attachment relationships with their owners. In addition, dogs are typically adopted by human families between the ages of six to 10 weeks, and their new owners become their primary attachment figures. When dogs are separated from their owners, they show functionally analogue behaviours to those of infants. They seek out the proximity of their owners and react with anxiety if they are separated from them. They also use the presence of their owners as a safe haven when faced with difficult situations.